Last year, during our May 2014 First Friday, Clayton Gray Home intro­duced you to an incred­ible young couple, Ryan and Michelle DeJong. Just shy of their two year wed­ding anniver­sary and just weeks after Michelle’s first marathon, they received dev­as­tating news. Ryan and Michelle had just returned from a cruise vaca­tion. While on that vaca­tion, shortly after snor­keling, Michelle began to suffer a headache. She thought that maybe she had sur­faced too quickly. The headache lin­gered. Within days of returning from the cruise, a whirl­wind of doc­tors, tests and surgery would reveal the Michelle had glioblas­toma mul­ti­forme. Incur­able brain cancer. On March 14, the date of diag­nosis, would now be known as the title to her story and FIGHTER would become her mantra. 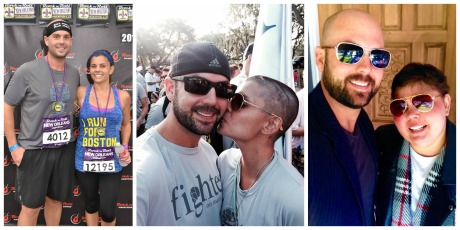 This year, as March 14, 2015 rolled around, it was a day of cel­e­bra­tion. One year of life that Michelle has won in her battle against brain cancer. After tra­di­tional cancer fighting methods failed, Michelle entered clin­ical trails to con­tinue her fight for her life and to find a cure for others. Mof­fitt Cancer Center has def­i­nitely become like a second home for the DeJong’s and the staff like a second family. Michelle’s coura­geous, spirit and atti­tude has won her the title as the face of the Neu­rology Depart­ment for Mof­fitt. Last year, after the shock of the diag­nosis wore off a bit, Michelle decided that she wanted to make her mark on the upcoming Miles For Mof­fitt race (and the world for that matter). She wanted to believe there was good in the world, or to #BeThe­Good. Her hus­band, Ryan went to work. With the help of friends, family and the local run club, Run Tampa, they cre­ated a small army of FIGHTERs and formed the largest non-​​corporate team and crushed their ini­tial fundraising goal of $10K. By race day, over 328 run­ners joined the team and more than $68K was raised. The second largest team, a boot­camp group called Get A Grip Fit­ness even joined the ranks by adding the FIGHTER logo to their shirts to show their sup­port. In honor of Michelle’s atti­tude and drive (and her secretly acquired tattoo) the team took on the title Team Fighter — Too Inspired By What’s Tran­spired. The FIGHTER logo is now easily rec­og­nized as a symbol of power and love that backs this local hero. 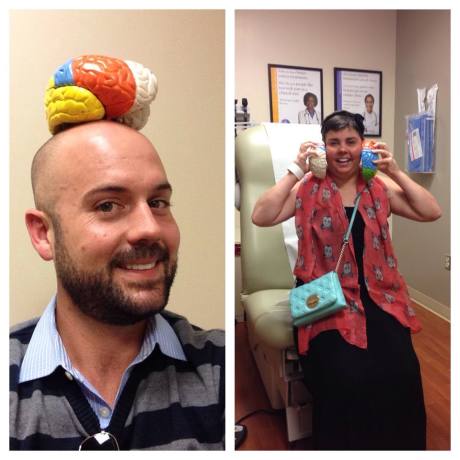 If you are just dis­cov­ering the mighty FIGHTER amongst us, you can check out her story on her web­site, www​.onMarch14​.com and follow her Face­book page for updates. In addi­tion, you can check out our  May 2014 blog posts, First Friday pre­view and First Friday recap for sto­ries and photos from last years event. We are thrilled and hon­ored to spot­light Michelle and Miles For Mof­fitt for a second year. This year, Michelle and Ryan want an even bigger FIGHTER team out there, not only to show love and sup­port for Michelle, but also to show their appre­ci­a­tion to Mof­fitt and all of the hard work they put into cancer research. You can join Team Fighter — Too Inspired By What’s Tran­spired on line or in the shop this Friday. Varying dis­tances of 5miles or a 5K walk/​run offer some­thing for all levels. If you are not in the Tampa area and still want to help Michelle and her team of FIGHTERs, you can sign up for the vir­tual run option, meaning wher­ever you are, you can run as part of the team in your own town. Still not ready to hit the pave­ment? Then you can sponsor the team! Just follow the link or Miles For Mof­fitt rep­re­sen­ta­tives will be on hand to answer any ques­tions. All of the monies raised through the Miles For Mof­fitt race go to cancer research. One hun­dred percent! 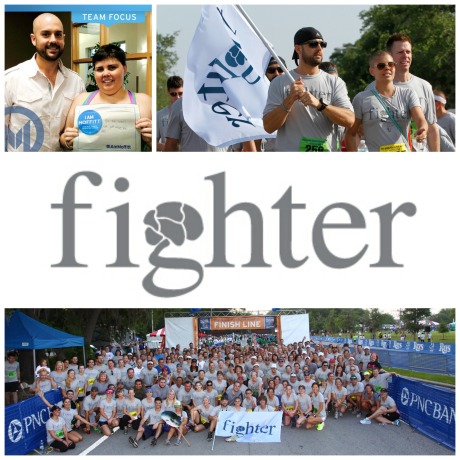 April 3rd, 2015 will be the hap­piest of happy hours as we join together to cel­e­brate FIGHTER First Friday from 6-​​9pm, and learn from this incred­ible young woman how to #BeThe­Good. Nick Peterson, Clayton Gray Homes favorite celeb, will be serving up FIGHTER cock­tails. The other local celeb, Richard Gonz­mart of the famous Columbia Restau­rant, has become close to the DeJongs and Michelle’s battle, so it only fit­ting that we cel­e­brate the night with yummy bites from his latest restau­rant ven­ture, the fab­u­lous Ulele. Joining in the cel­e­bra­tion, another person close to the DeJongs, RyanG Photo, will be our paparazzi for the night, cap­turing all of the beau­tiful moments of the night.

All of us at Clayton Gray Home hope to see you on Friday, so that together we can cel­e­brate Tampa’s small but mighty FIGHTER, Michelle. If you have a FIGHTER shirt, please feel free wear it. If you would like more infor­ma­tion on pur­chasing FIGHTER mer­chan­dise including a Ryan DeJong cre­ated BE THE GOOD art­work, please check the shop and the FIGHTER web­site at www​.onMarch14​.com. Instead of our usual swag bags, we will have spe­cial prizes and offers for the first 50 people in the door and as always,  Clayton Gray Home will proudly donate 20% of the sales from First Friday to the Team Fighter– Miles For Mof­fitt team.