Fighter First Friday is the only time we have ever repeated a First Friday theme and charity, so it’s safe to say that Michelle DeJong and Mof­fitt Cancer Center hold a spe­cial place in our hearts. The week fol­lowing a First Friday we always post a recap stating how great and suc­cessful the night was, and this is no excep­tion. Clayton Gray Home was packed to the brim with many new faces who came out to sup­port Michelle and Ryan, Miles For Mof­fitt and Team Fighter — Too Inspired by What’s Tran­spired. Run Tampa run club mem­bers, Leigh Spann and Adri­enne Ped­erson from News Channel 8,  and mem­bers of the Tampa com­mu­nity joined in cel­e­brating our FIGHTER. Tampa pho­tog­ra­pher, Ryan G Photo, gra­ciously cap­tured the mem­o­rable moments of the night as guests min­gled and enjoyed deli­cious food from Ulele. Of course, after seeing Michelle, the biggest hit of the night was Nick Peterson and the FIGHTER cock­tail. Good food, drinks and com­pany set the gen­erous mood of the night with many signing up for the Miles For Mof­fitt race, making dona­tions, and buying FIGHTER mer­chan­dise. Com­bined with Clayton Gray Home donating 20% of the sales for the night, we all had a chance to #BeTheGood. 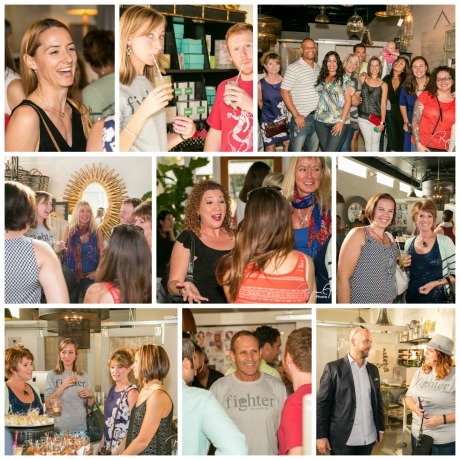 Guests were greeted by the Miles For Mof­fitt crew when they entered the store. As they signed in, they learned about the Miles For Mof­fitt race, were able to join Team Fighter and the first 50 people received Easter eggs with secret dis­counts and prizes for the night. The Miles For Mof­fitt race takes place on May 9th on the campus of USF. There are sev­eral dis­tances avail­able so that all run­ners and walkers can par­tic­i­pate, there is even a vir­tual option. One hun­dred per­cent of the reg­is­tra­tion fees and funds raised for Miles For Mof­fitt go back into cancer research. Per­haps the biggest high­light of this race is seeing cur­rent patients, sur­vivors, doc­tors, nurses and staff, out on the course and seeing the vast amount of people that they have sup­porting them in their fight. No matter your pace or reason for being there, it is def­i­nitely a race that you simply don’t want to miss. The amazing after party and hearing the sto­ries of what brought people to the race and to form teams, will leave you with a warm fuzzy feeling for days and weeks to come.

On March 14, 2014 a diag­nosis was deliv­ered that would for­ever change the lives of Ryan and Michelle DeJong and that of the Tampa com­mu­nity. Just months shy of their second wed­ding anniver­sary, the young couple learned that Michelle had an inop­er­able, stage IV brain tumor. Dev­as­tating news that would bring the strongest to their knees and throw in the towel. Not this couple, how­ever, cancer messed with the wrong duo. Both were risk takers, go-​​getters, busi­ness owners (Michelle was named one of Tampa Bays Up and Comers under 30) and FIGHTERS. What cancer really didn’t bar­gain on was the amount of people that would join in to sup­port and fight right along side with them. After tra­di­tional cancer fighting methods failed, Michelle decided that the fight wasn’t over, she and Ryan enrolled in clin­ical trials. This year, as March 14, 2015 rolled around, it was a day of cel­e­bra­tion. One year of life that Michelle has won in her battle against brain cancer. It hasn’t been easy and it hasn’t come without cost, but Michelle’s fight is one that will pave the road to a cure for Glioblas­toma. Michelle’s coura­geous, spirit and atti­tude has won her the title as the face of the Neu­rology Depart­ment for Mof­fitt. Last year, after the shock of the diag­nosis wore off a bit, Michelle decided that she wanted to make her mark on the upcoming Miles For Mof­fitt race (and the world for that matter). She wanted to believe there was good in the world, or to #BeThe­Good. Her hus­band, Ryan went to work. With the help of friends, family and the local run club, Run Tampa, they cre­ated a small army of FIGHTERs and formed the largest non-​​corporate team and crushed their ini­tial fundraising goal of $10K. By race day, over 328 run­ners joined the team and more than $65K was raised. In honor of Michelle’s atti­tude and drive (and her secretly acquired tattoo) the team took on the title Team Fighter — Too Inspired By What’s Tran­spired. The FIGHTER logo is now easily rec­og­nized as a symbol of power and love that backs this local hero.

Please con­sider joining Team Fighter — Too Inspired by What’s Tran­spired and help Michelle to create an even bigger team and raise even more money for cancer research at Mof­fitt. Remember, run or walk, sev­eral dis­tances, a kids fun run, and a vir­tual option make it a race for EVERYONE, every­where. There is always the option of making a dona­tion to the team or spon­soring a runner on the team. If you have already signed up for Miles For Mof­fitt, you can email the race director and be added to Team Fighter. Please check out the FIGHTER store for shirts, water bot­tles and more.